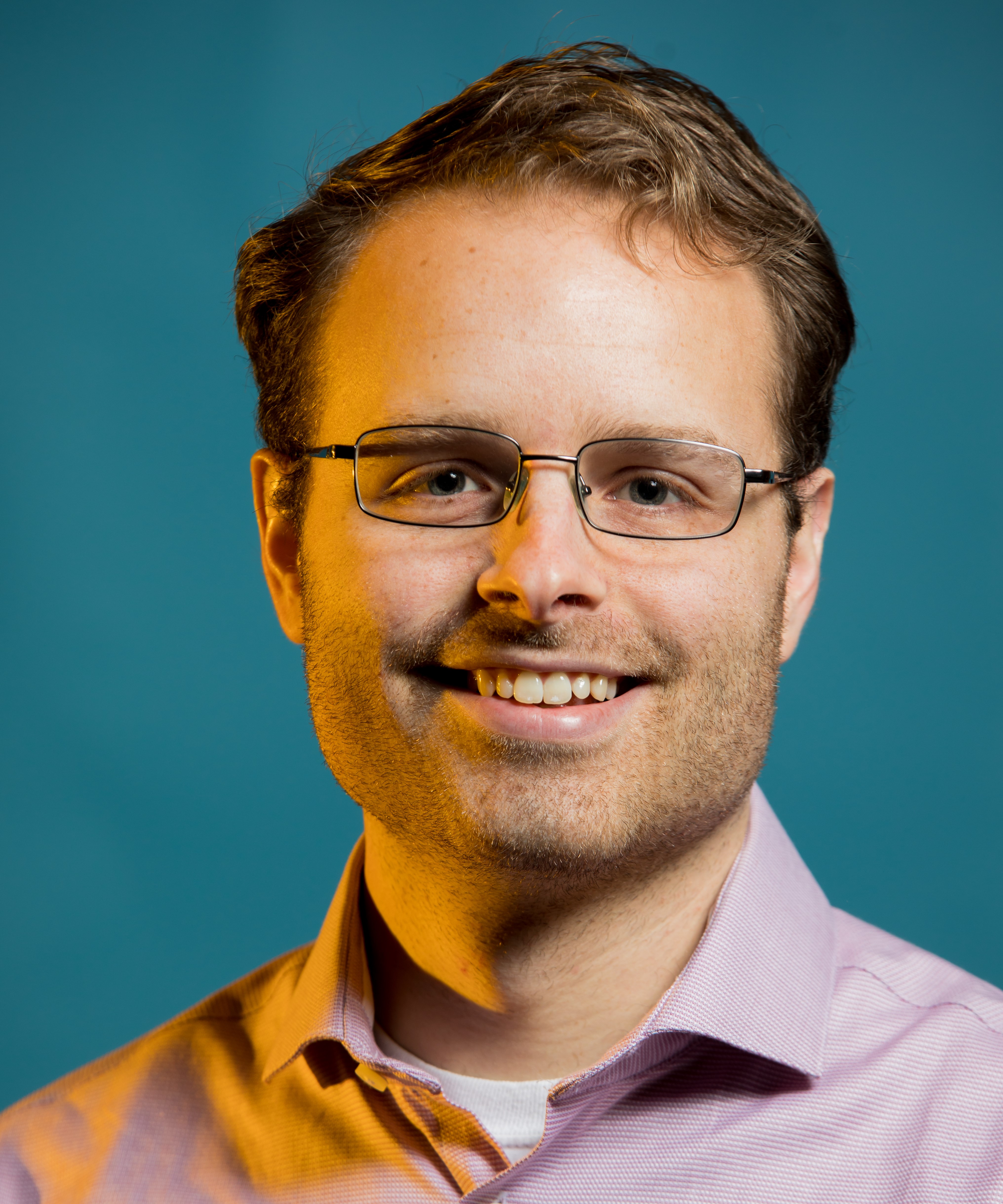 In the previous notebook we reviewed linear regression from a data science perspective. The regression task was roughly as follows: 1) we’re given some data, 2) we guess a basis function that models how the data was generated (linear, polynomial, etc), and 3) we chose a loss function to find the line of best fit. We saw how using the sum of squares gives us the Ordinary Least Squares problem; given $N$ data samples, the loss function $\mathcal{L}$ looked like,

This may look familiar; this is essentially the equation of the magnitude of a vector, or the Euclidean distance, otherwise known as the L2 norm, which we saw briefly in the previous notebook. For a real vector $v$ with $n$ dimensions, this is defined as,

where each $v_{i}$ is a dimension of the vector $v$. If the error $e = y - \hat{y}$, then the loss function $\mathcal{L} = ||e||^{2}_{2}$ is the square of the L2 norm of the vector of errors. It’s helpful to represent data as matrices, and errors as vectors, as there are many norms we can choose from to be loss functions. Using, and as we will see, combining different norms have different effects on the outcomes of the regression problem. We’ll look at a few in this notebook. 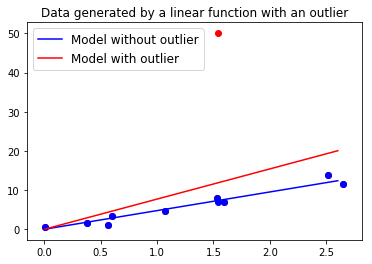 In the previous homework assignment, we saw how a single outlier has a large effect on the value of the linear model’s coefficients that we solve for, like in Fig. 1 above. That’s because the loss of a single data point increases as the square of the difference between the model’s output and the data value. The outlier’s influence comes from the power of the difference, so let’s reduce the power; the L1-norm is defined as,

The L1-norm (sometimes called the Taxi-cab or Manhattan distance) is the sum of the absolute values of the dimensions of the vector. It turns out that if we just use the L1-norm as our loss function, however, there is no unique solution to the regression problem, but we can combine it with the ordinary least squares regression problem. We can imagine that between two points A and B there’s a unique shortest straight line distance (with distance equal to the L2-norm), but multiple paths with equal Manhattan distance (the sum of the absolute values of the x component and y component), as illustrated in Fig. 2. 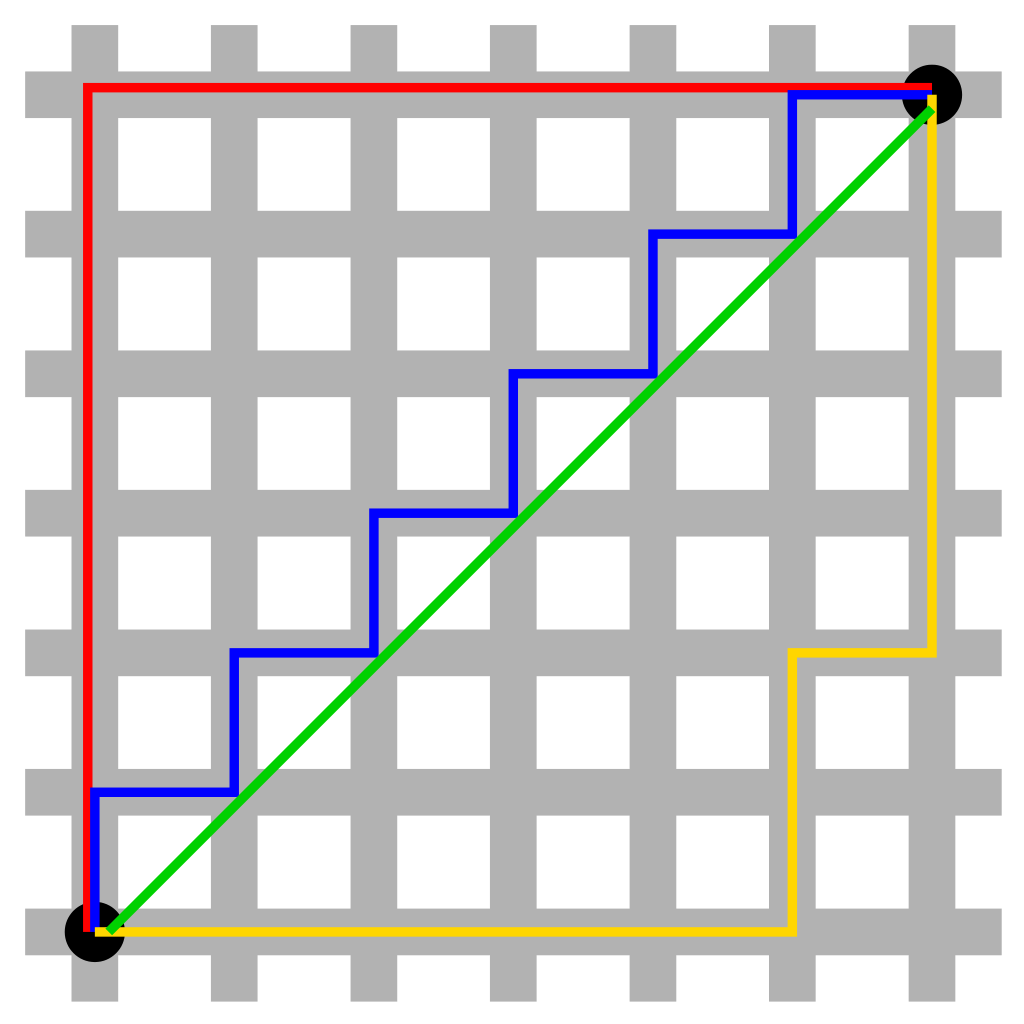 There are all kinds of regularization combining different norms, but LASSO regression is particularly useful. In the assignment questions jump right in and compare the outputs in our outlier problem.

In the first notebook, when we introduced linear regression we glossed over bias. Let’s go over what we mean by bias and how to incoporate it into a regression problem. Previoius we saw that in linear regression we need to find weight estimates $w$ such that $w$ minimzes $\mathcal{L}(y, \hat{y})$ where in vector notation for $k$ dimensional $x$,

which is precisely the equation of a line with a bias term that we were after. Oftentimes in machine learning you might see the OLS loss function written like,

This is inconvenient because when we go to compute the derivative of the loss function with respect to the weights $w_{i}$ we have to compute multiple derivatives, so if we append a 1 to end of the vector $x_{n}$, we can incorporate a bias term without seeing weights $w$ spread out all over the place. This is useful because we want to think of data as matrices where each row is a sample, and each column is a feature. A column of 1’s is just a bias feature in the data, and the OLS loss function in matrix notation with this bias feature looks like,

and as we saw in the previous notebook, it’s much easier to find the closed form solution with matrix notation. That’s one reason why virtually all popular data science tools will represent data as a matrix.

Using the ordinary least squares solution from last week’s assignment, incorporate a bias term and find the line of best fit for the data in “homework_2_data.txt”

We’re going to look at the LASSO regression solution to the outlier problem. The closed form solution so we often use a form of gradient descent called coordinate descent. For now we won’t worry about how coordinate descent works, but just go ahead and see how the LASSO solution looks for various values of $\lambda$. First read through the following example code.

For problem # 2, fit with the LASSO regressor for several values of alpha between 0.001 and 100.0. Plot at least five different polynomial fits like the above for different values of alpha. For each alpha, print the coefficients that it solves for along with the plot and describe what’s happening.

The L1-and L2-norms are special cases of the Lp-norm, which is a family of functions that define a metric space where the data “lives”. One way to think of machine learning tasks is transforming that metric space until the data resembles something manageable with simple models, almost like untangling a knot. The Lp-norm for an $n$ dimensional vector $x$ is defined as,

If we take the limit $p \rightarrow \infty$, then the L-$\infty$ norm gives us a special function. For multiple values of p, plot the unit ball in 2 dimensions, and make a guess as to what the L-$\infty$ norm looks like. The unit ball is the value of the norm for vectors a distance of 1 away from the origin according to the norm. Below are examples for the 1 and 2 norms. If p is too large, you won’t be able to plot it with the functions I’ve given, so look at values of p like 3, 4, and 5 and then make a guess.

The Huber loss is another way to deal with the outlier problem and is very closely linked to the LASSO regression loss function. The Huber loss with unit weight is defined as,